Head Instructor Brett Hilgemann was born in 1960 in Leola, South Dakota and lived in several towns throughout the state. While in Jr. High School he became interested in the martial arts like so many others when Bruce Lee came on the movie scene. He started reading books and practicing on his friends. Upon entering the US Air Force at age 18 he started taking martial arts; Kung Fu and Go Ju USA. After he got out of the Air Force in 1980 he trained in Rapid City, SD in Kobyshi Ryu Shorin Ryu Karate. After getting married in 1983 and moving away he was not able to take Shorin Ryu classes so he practiced on his own,trained in some Wing Chun and Tae Kwon Do  until his daughter was strong armed robbed in 2005. He and his daughter Stephanie (3rd Degree Black Belt) found Sensei Tim Evans and  trained with him for several years. Sensei Brett is also a member of Suri-Te Bu-jutsu Kai under Sensei Troy Price where he received his 5th degree rank. 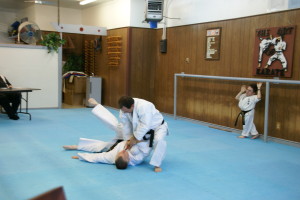